The Story Behind The Blasphemy Law - What made me write it?

About 15 months ago I was at a party here in Melbourne. We were engaged in a friendly discussion on blasphemy laws. As you are probably aware, blasphemy laws are used to subjugate minority groups, quell dissent, grab land and for many other nefarious purposes. They have caused untold misery to thousands of people.

Blasphemy is a punishable offence in many Muslim countries. In Pakistan, it is punishable by death. Not only is the law draconian it is also very poorly written. This makes defending it next to impossible.

During this conversation two guests became so irate they were ready for a punch-up or worse. I have been in life and death situations before when it comes to religious fanatics. Many cannot abide simple logical arguments. When they run out of rebuttals often their only recourse is violence. Still, it was a shocking reminder just how bad they can be.

When I was younger I lived many years in Pakistan and have had many run-ins with religious fanatics. One of my university lecturers for Islamic Studies co-founded Lashkar-e-Taiba with Osama Bin Laden. Later on, he founded Jamaat-ud-Dawah which pretends to be a charity. Do a Google search to see just how bad they are.

We were bitter enemies, at least I was his. I used to always stand up in his class and ask him questions about some of the contradictions in Islam such as why slavery was allowed or why women were not allowed, four husbands. From my perspective, I thought as a teacher he ought to be open to questions

🙂 and to an extent, I enjoyed needling him. It was the only entertainment in an otherwise boring lecture. To cut a long story short he kicked me out of class five times. The last time half the class left with me in protest. After that, he banned me from his classes for life.

Back then I was a young and naive and rebellious student. I did not have a clue just how dangerous the man was. Had I known he had set up a militant group I might have been more circumspect in my dealings with him.

During my university years, I publicly backed a secular student union against the radical Islamist Jamaat Islami. Here too I was naive and believed in my right to freedom of speech and of association. In the course of elections, which the secular group won, I had some experiences that were life-threatening. I was among a group of students who were shot at from a distance. I still remember the awful sound a bullet makes when it's coming towards you.

I once had to run for my life from a hostel when I discovered I had been targetted to be kidnapped and tortured. Some friends helped escape on motorcycles.

Like many of my friends and fellow students, I received my share of death threats over the phone. Thankfully none of them amounted to anything otherwise I would not be writing this today

. But I was lucky. Some of my friends had to leave the country because they were on extremist kill lists.

Anyway, I decided I am going to war with unreasonable people with the only weapon I believe in, the proverbial pen. Hopefully, with The Blasphemy Law and future novels I will do my little bit to help push back the tide of intolerance and hate that threatens to engulf mankind.

Starting on Jan 1 this year I began writing this novel. I wanted it to be an enjoyable and fast-paced thriller so it has action, suspense and sex (tastefully done). Everything that is not a figment of my imagination was carefully researched including details of how fanatics think and how terrorism is funded.

The book balances social messages with entertainment. It is meant to be enjoyable to read and takes a balanced look at life in modern Pakistan.

So far twelve of my friends have been beta readers for The Blasphemy Law. They were unanimous in their feedback. They all found the book to be a thoroughly good read.

I originally posted this article on The Blasphemy Law Facebook Page. 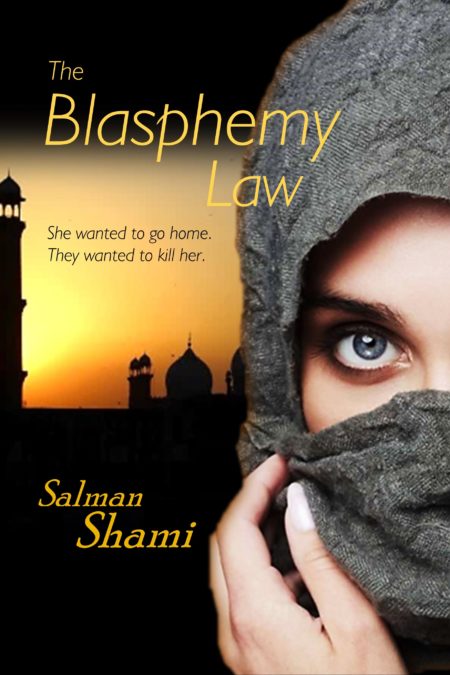 Click on the image to read 11 chapters for free The famous writer Salman Shami says:

The Blasphemy Law is set in modern-day Pakistan, a South Asian country astride the geopolitical and ideological fault-line of Asia. With the world’s 13th most powerful military, the 6th largest nuclear arsenal, a population of 207 million, high illiteracy, grinding poverty, and burgeoning support for Islamic fundamentalism, it is a nuclear-charged powder keg waiting to explode. Terrorist groups vie for supremacy, trying to create conditions to topple the corrupt and fractured administration. famous writer Salman